The couple opened a cafe in Cold Spring

After spending four months in Vermont at the start of the pandemic, Angie Speranza has sought solace and activity in a pastime that has always brought happiness: baking. She baked for friends and neighbors to feel productive and continued to bake after moving to Carmel with her husband Ken Zuidema.

Angie Speranza and Ken Zuidema in a candy store

“We made friends in the Carmel area and we started handing out Angie’s baked goods to them,” Zuidema recalls. “After trying them, they asked if we sold them anywhere. We received several bookings from a website we created and then decided to look for a space. Everyone and everywhere wanted us to come to where they lived.”

After exploring locations from Katona to Fishkill, they settled on Cold Spring and Beacon. Nothing fit the bill until someone mentioned Houlihan to Bill Pugh. Lawrence Real Estate leaflet at the Garden Cafe on Main Street saying the space would be available soon. Pugh passed this on to Angie and Ken, who went to look, and Angie’s bakery and café was born.

It was actually born decades ago when Speranza’s Italian grandmother shared her culinary skills.

“What I learned most from my grandmother was that she baked not for herself, but for everyone,” says Speranza. “She had her own recipes, but she didn’t follow them. She made it a feeling, an instinct, a love. She just “knew” and that’s how I learned. 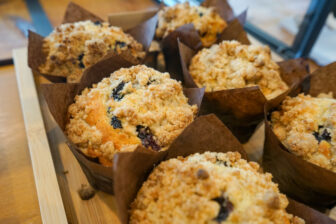 “All my life I’ve been drawn to making people happy by giving them baked goods, seeing someone smile while taking a bite of it, and hoping it will make their day better,” she says. “I’ve been looking at recipes all my life, but a lot of this is instinctive – I know exactly how dough should feel and look like every minute of baking.”

Speranza says she finds it therapeutic to get up in the middle of the night and bake, which is good because she’s doing it a lot these days. The store sells baked goods such as large muffins, breakfast cookies, biscuits, muffins, lemon pound squares, deep plate cakes, pies, strawberry shortcakes and breads (including sourdough, soft bread and challah), as well as sandwiches with baguette.

There’s Joe’s coffee, selected after much sampling, as well as iced coffee, tea and lemonade, and maybe espresso if the supply chain cooperates.

Speranza didn’t start her career as a baker: she worked in marketing and promotions for CNN and other networks, editing and editing movie trailers before joining Showtime. In 2017, she founded her own company, Girlband. She ruled it until the pandemic forced her to reconsider.

“That’s when the baking started,” she says with a laugh. “Business was fine, but it got to the point where life in New York just didn’t work for me.”

Zuidema had experience in the restaurant industry: at the age of 12, he washed dishes in a pizzeria and resold fruit from the Hunts Point market to merchants on the streets of Manhattan. He managed Sbarro’s and the Upper East Side Cafe, among other jobs, and worked in restaurants in Denmark for four years. He eventually returned to New York, got a degree in information technology, and worked in the field for 15 years before returning to food.

The couple say they visited all the nearby food service establishments before opening to see what they were selling. “We didn’t want to cross paths and step on someone’s toes,” Speranza says.

“The community was so nice,” Zuidema adds. “For two people who have lived 35 years in New York, this is fantastic. Our clients were amazing: many talked about their lives, love, emotions. The tourist season will be great, but we want to serve the locals. People are full of offers that we love and are already loyal. It was the best and most pleasant surprise.”