Tomatoes may get more attention, but throughout Italy, lemon is also often used in pasta.

Along the Amalfi Coast, ring-shaped calamari pasta is paired with shellfish, parsley, garlic, and roasted sweet local lemon strips. In Sicily, roasted pistachios, parmesan, lemon juice and zest are added to broken pasta. And in Rome, the juice is whipped with olive oil, cream and parmesan for al dente tagliatelle.

The sour and slightly sweet citrus balance balances the starch of the noodles and the weight of the sauce, acting like a dose of freshly ground black pepper that offsets the pecorino romano in the cacio e pepe. And it fulfills almost the same role as tomatoes, providing the acidity that cuts through the cheese.

In fact, the combination of lemons and pasta is perhaps more traditional than the red sauce itself, as the fruit arrived in Italy at least 1,500 years before the tomato.

Lemon features prominently in one spread from our COOKish book, which limits recipes to just six ingredients without sacrificing flavor. Bright, invigorating lemon zest and juice bring out the zest of garlic, pancetta and capers, while golden crispy breadcrumbs add texture.

These spaghetti are also a miracle in one pot: we cook the pasta in the minimum amount of water, and the resulting starchy liquid forms a slightly thickened sauce that coats the noodles. 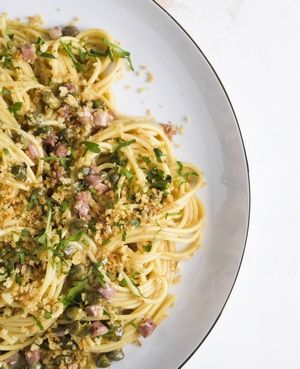 Grated zest and juice of 1 lemon